An event every week that begins at 10:00 am on Monday, Tuesday, Wednesday, Thursday, Friday and Saturday, repeating until October 7, 2022

“A SURE HAND” WORKS BY THE LATE LORETTA BENHAM-

The first is featured work by Loretta Benham, opening on September 6 and running through October 7th.  When Loretta Benham died in 2019, the Highlands lost one of our most proficient and prolific artists. She grew up drawing and painting. Long before the internet, she studied by way of correspondence lessons with the Famous Artists School, widely advertised in periodicals and on matchbook covers of the era. “Learn to DRAW! they said-that is just what Loretta did. Later she studied in person with local artists such as Elisabeth Smith of Clifton Forge and Jeanne Shepherd of Millboro and also traveled for workshops and classes with nationally known artists. Loretta loved many different media and excelled in most- pencil, colored pencil, ink, oil, acrylic, watercolor and collage, working either abstractly or representationally as she needed. She worked diligently and explored all sorts of topics and techniques: rifle parts for a historic restoration at Fort Bragg, KY; reflections of the colorful characters that exist in all small towns, cowboy scenes, wild animals, chickens and lots of flowers. All of these and more came under the attention of her carful eye and clever brush. 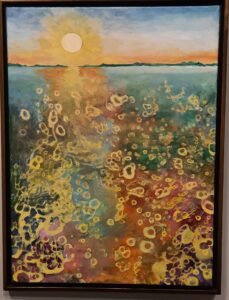 Opening on September 6 and running through October 7th, we’ll also feature work by JoAnn Taylor in the Galleries. Jo Ann Taylor is another notable Alleghany artists. She lived in Covington for many years until she and her late husband Bill moved to Easley SC where she continues to paint and create. Her beginnings were here, however, working with “the awesome Bari Ballou” at the former Dabney S. Lancaster (now Mountain Gateway) Community College before moving on to attend Mary Washington College and UVA.  Like Loretta, JoAnn also studied with many well-known workshop artists as well as in Maine and Seattle, Washington. Covington residents of a certain age will remember JoAnn’s illustrations for the 1951 & ‘52 CHS Cougar yearbooks. Jo Ann taught art at Greenville Tech and Furman University in SC. Her exhibit list is extensive, and like Loretta, her work covers a wide range of ideas. In fact, there are a couple of paintings of the same topic that each has reflected in her own way .Come see if you can find them! Learn more about these talented Alleghany County artists as you explore the variety of subjects and styles. You will be delighted to be in their company! Through October 7, 2022.

Share this event on:
BACK TO EVENTS
Scroll To Top