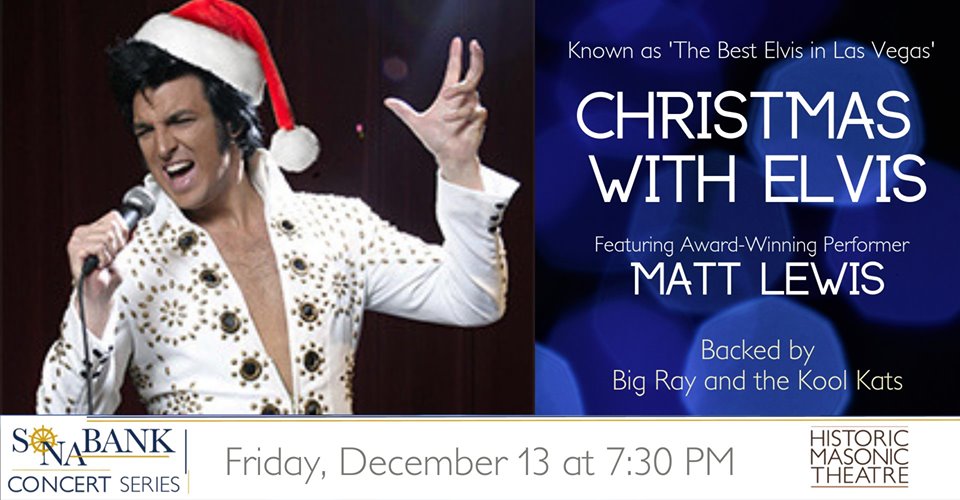 Come enjoy holiday hits from the one & only King of Rock and Roll delivered by Matt Lewis, the Elvis Tribute Artist USA Today called “The Best in Las Vegas!”
From “Blue Christmas,” to “I’ll be Home for Christmas,” “Here Comes Santa Claus,” “Santa, Bring My Baby Back to Me,” and many more, your holiday spirit will be lifted. You’ll also enjoy the classic Elvis repertoire with songs from his Rockabilly era, the 1968 Comeback Special and, of course, the Las Vegas years.

Matt Lewis began his entertainment career as an Elvis Tribute Artist at the age of twelve. By his twenty-first birthday he was headlining with the world famous “Legends in Concert” show around the world. Matt has entertained audiences from Singapore, Germany, Australia, Poland, Canada, Japan, Monaco, China, to almost every major city in the United States. Matt will be backed by the 12 piece Long Live the King Orchestra also known as Big Ray and the Kool Kats.

After the performance, Matt Lewis will hold a Meet & Greet in the Lobby!