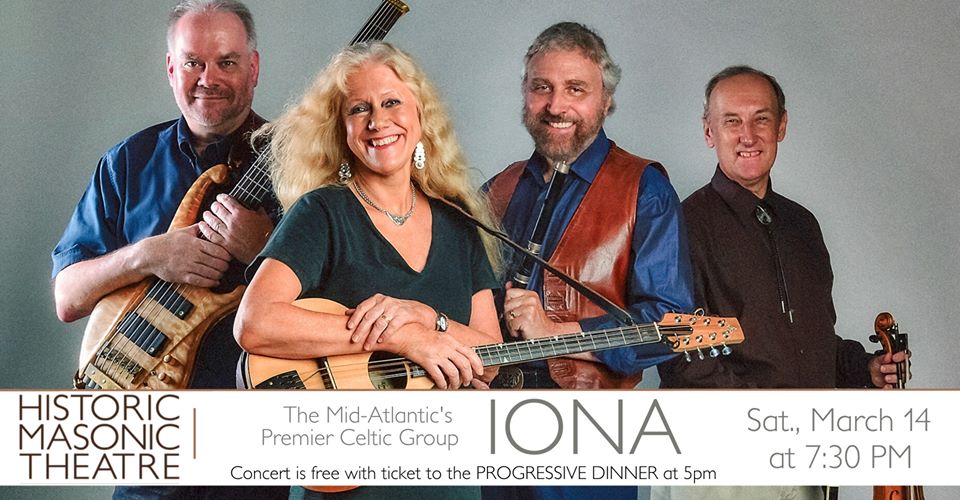 The internationally acclaimed, Washington, D.C. based group, IONA will bring its singular representation of the greatest Celtic land in the world–America–to the Historic Masonic Theatre, IONA treats its audience to high energy entertainment featuring multiple fiddling styles, dynamic dancing, driving percussion, and strong vocals from all the Celtic nations, including America. Presenting the music and dance of all the Celtic countries–Scotland, Ireland, Wales, Cornwall, the Isle of Man, Brittany, Asturies and Galicia–IONA emphasizes that America is not only the repository of all these cultural influences, but also the progenitor of many of its own. Audiences are encouraged to clog along, or dance Breton line dances, and join in singing. Joining IONA at this show will be Marsha Searle, Principal Dancer with the Footworks Percussive Dance Ensemble, adding a visual dimension to much of the Celtic dance music.

Conceived in 1986, IONA has evolved into one of the top rated pan-Celtic groups in the world. Co-founders Barbara Tresidder Ryan (lead vocals, Celtic bouzouki, guitar and bodhrán) and Bernard Argent (wooden flute, whistles, doumbek, back-up vocals) are joined by Air Force Band veteran Jim Queen on fiddle, banjo and vocals, and Chuck Lawhorn on 6-string bass guitar, whistles and vocals. The group has released eleven albums, the most recent of which, Silver, is their 25th anniversary celebration.

“This is the real stuff as far as Celtic goes, and these are authentic, versed musicians…The members of IONA look to be story tellers, song collectors (and) explorers. A trip to IONA is a fascinating journey.” -Music Monthly Regional Review of Branching Out by Kyf Brewer