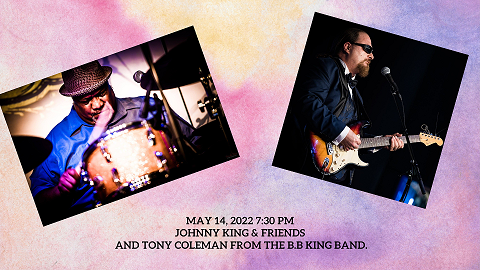 Johnny King has been called the future of the Blues.  He is a producer, singer, songwriter, and lively performer.  For over twenty-five years, he has been writing and performing his own music.   He plays slide, lead, and rhythm guitar like lightning in a bottle.  His other instruments include drums, five-string bass, Hammond organ, keys, mandolin, and trumpet.   Johnny King’s music ranges from Blues, Roots, Rock, Reggae, Bluegrass, Country, Motown, Gospel, Funk, Latin, Ragtime, New Orleans jazz, and Psychedelic Southern Rock.  He calls it the “Baptism of Sound!”  He has written well over 60 songs and counting.  Most recently, he has recorded 50 of them at Skip Brown’s Final Tracks Studio in Roanoke, VA.  Tony Coleman (BB King’s drummer for over 30 years) is singing, playing drums, and co-producing the record. Together they are forging across music genres and making musical history all over again.