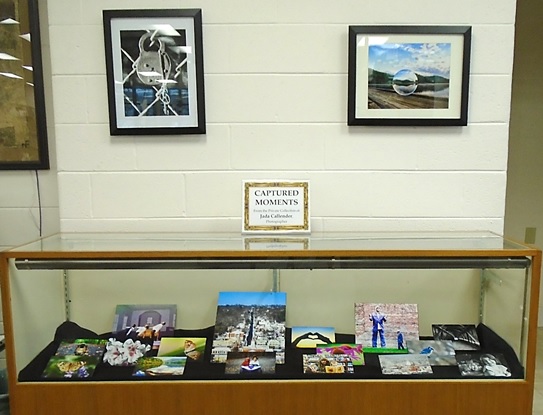 Among the wide variety of scenes, Douthat State Park is represented with a fall photo by the lake.  The Riddick Dance Company is featured during a production at the Historic Masonic Theatre.  Also included is a photo of Captain Jack Sparrow during the 2015 Con of the Mountain event.  A view of the town featuring Clifton Forge’s Jefferson Avenue rounds out the display.

Ms. Callender’s photographs have been used for magazine and book covers, including the front cover on Stewart Goodwin’s mystery, “The Secrets They Kept.”  She has also had photographs selected for the “Uniquely Alleghany” calendar.  Recently, three of her photographs won honorable mention in the Fx2: Photography Exhibit.  She has an online gallery with FineArtAmerica.com where prints can be purchased along with other items that can be imprinted with her images.

“My journey into photography began at the age of five,” Ms. Callender says.  “I would play with my mother’s camera.  Later, my mother bought me my own camera.”  She continues, “Photography has been my constant companion ever since then.”

Ms. Callender’s goal is to “capture images better than the ones I captured the previous day.”  She concludes, “I am inspired by the things I see in my daily life, the odd and the unique.”

A native of Clifton Forge, Ms. Callender is a graduate of Radford University.  She can frequently be seen walking around the community with her camera and photographing area events.