Music is Love at the Virginia Opry 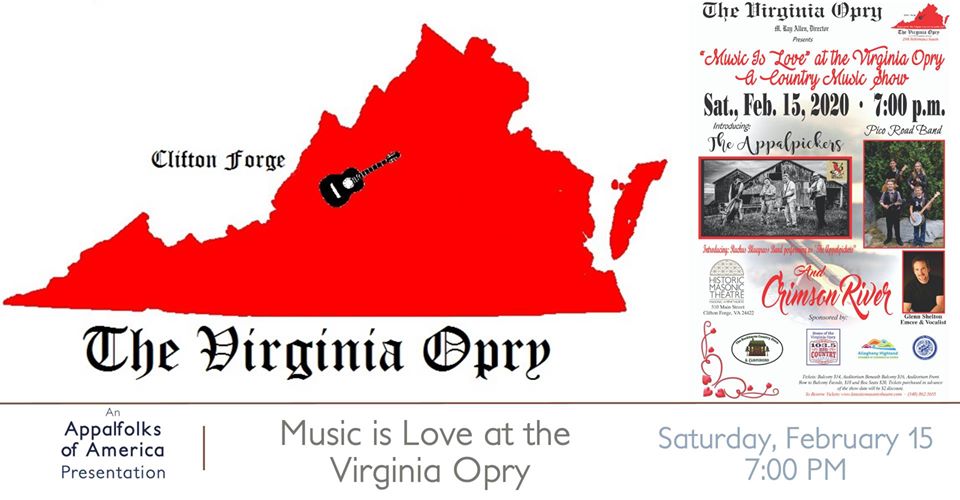 The Virginia Opry will celebrate its 29th performance season by presenting “Music Is Love at The Virginia Opry,” in The Historic Masonic Theatre on Saturday, February 15, at 7:00 p.m.

Glen Shelton, a vocalist and songwriter who has opened for 40 nationally prominent acts, will serve as vocalist and emcee.  He has written and recorded numerous Top Ten Christian Country songs.

Pico Road Band, a youth string band, will open the show, and Ruckus Bluegrass Band, making its debut on The Virginia Opry as The Appalpickers, will be featured and inducted into The Virginia Opry, bringing the troupe’s total members to 40.  Crimson River, a gospel music band from The Alleghany Highlands, will be the featured band after intermission.

Members of The Appalpickers will be inducted into The Virginia Opry and perform after Pico Road Band opens the show.  Jeff Downey, an award winning guitarist and instructor, has performed for Appalfolks of America Association (AAA) before at The Historic Masonic Theatre, and he will be joined by Ruth Huffman, upright bass; Will Lee, banjo; and Timmy Martin, mandolin.  Each member is a vocalist, and the group’s website is Ruckus Bluegrass Band@ theruckusbluegrassband.   The group from Rockbridge County is known for its excellent harmonies and traditional bluegrass renditions.  When the band plays at The Virginia Opry, the group will be billed as The Appalpickers.  A guest appearance by Ricky Lee, Will’s father, has been arranged.  Ricky has a professional resume that includes being a member of Ralph Stanley and the Clinch Mountain Boys.  He has also performed with Ricky Scaggs.

Pico Road Band features three musicians under the age of 15 who are vocalists: Kaeli Berry, fiddle and ukulele; Justin Broughman, mandolin; and Nathan Fender, guitar.  Mica, Nathan’s younger brother, plays the banjo.  The group performed at Appalfolks of America and Love’s Travel Center’s benefit for the Children’s Miracle Network at The Historic Masonic Theatre in 2019 that featured Ray Tucker and Friends as the headliner band.

The Freight Hoppers, frequent guests on Garrison Keillor’s “Prairie Home Companion,” performed on The Virginia Opry in addition to other famous groups such as The Lonesome River Band, The Farm Hands and The Darrell Webb Band.

“I wish to thank Big Al and the Highlands Media Group for The Virginia Opry’s new home at 103.5 Big Country and for promoting our troupe of performers that has grown to 36 members who make up ten bands that will be performing on The Virginia Opry this year,” Allen noted.

He continued, “Music Is Love” is our theme for The Virginia Opry’s 29th performance season, and that is a tribute to the late Bob Campbell who performed as the lead vocalist at the Bob Campbell and the Coachmen’s concert in 1994, a concert that set the attendance record at the Historic Stonewall Theatre when 510 patrons purchased tickets.”

Tickets are $14 for balcony seating, $16 for auditorium seating beneath the balcony, $18 for seating from the auditorium’s front row back to the balcony façade and $20 for box seats.  Tickets purchased prior to the day of the show will be discounted $2 per ticket.  The box office number for The Historic Masonic Theatre is (540) 862-5655.  Also, tickets may be purchased online at www.historicmasonictheatre.com, or by visiting the box office at 510 Main Street in Clifton Forge between 10:00 a.m. and 3:00 p.m., Monday through Friday.