Something Wicked: Fear the Reaper 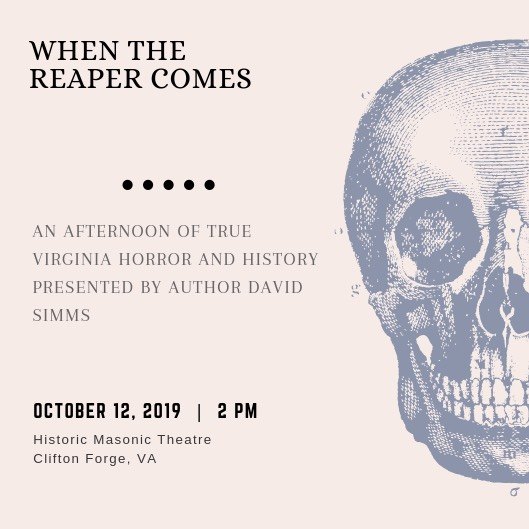 Saturday, October 12, 2019 at 2pm
In the John E. Hillert Auditorium
Admission is Free

David Simms will lead an October-themed event based on his novel, FEAR THE REAPER, which uncovers the dark history of Virginia in a historical thriller. Far from a “book talk,” the interactive afternoon will be full of ghost stories, hidden history, a trivia contest, and more. Prizes will be available – included ghost tour tickets, signed books (by other authors) and those who attend will be entered into a contest for a night’s stay in the Blackburn Inn, the setting for the novel, the original Western State Lunatic Asylum.

David Simms lives in the Shenandoah Valley of Virginia after escaping the horrors of New Jersey and Massachusetts. A special education and psychology teacher, college English instructor, counselor, music therapist, ghost tour guide, and book reviewer, he moonlights in the Slushpile band on lead guitar after co-founding the Killer Thriller Band with several best-selling authors. Dark Muse has just been released, a middle grade/YA novel that’s been called “If Harry Potter had a band mixed with Indiana Jones.” Fear The Reaper was released last year and was the first fictional account of the American eugenics movement.